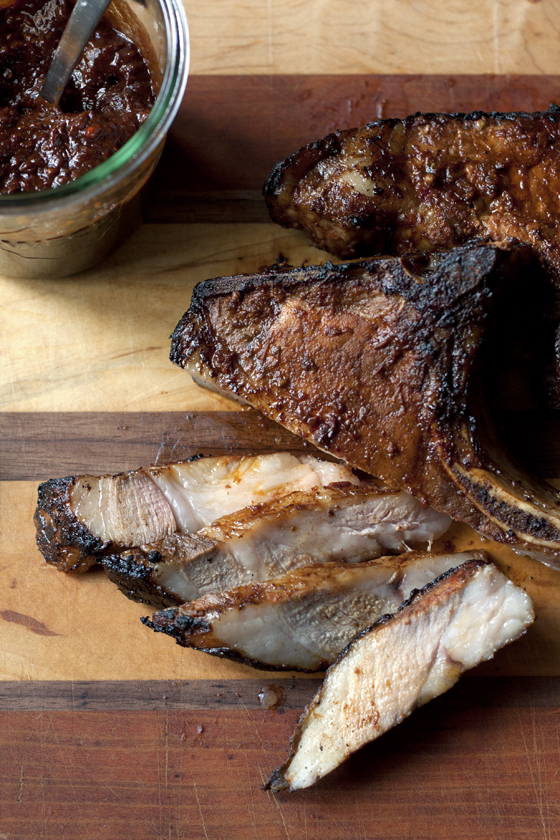 This year I joined my first meat CSA: in the spring, I paid for a portion of a pastured, heritage breed pig from Millstone Farm in Wilton, CT. They raised up our pigs all summer, and in August (conveniently while I was still in California) Tai went to the farm and picked up lots and lots of pork. And by lots, I mean lots: shoulder and fresh ham and roast and cutlets and bacon and sausages galore. And, of course, chops.

These were the most massive pork chops I’ve ever seen. The package of two chops weighed 1 ¾ lbs; I swear one of them was a solid pound by itself. I knew they would take some oven time to cook through and I wanted to do something a little different, a little special. So I turned to my long, long list of recipe bookmarks (no, I’m not really a Pinterest person; yes, I still use internet bookmarks) and found adobo marinated pork chops by Diana Henry at Leite’s Culinaria.

The adobo sauce itself is brilliant: rich, layered, smoky yet sweet, not overly spicy. I’m thrilled to have a jar in the fridge as I can think of any number of things it will work beautifully on. I made a few changes to the pork chop technique, preferring to marinate overnight, then scrape off the marinade and sear the chops, rendering some of the fat in the process, and finally, finish in a hot oven. However, if you have very thin or lean chops, with little to no fat along the edge, you may get away with just sticking them in the oven; the adobo sauce lends a lot of flavor and color to the skin, so you could probably skip a sear.

The chops were fabulous, but in all honestly, I’m not sure if that is because of the glorious heritage pork, richly marbled and flavorful, or because of the adobo marinade. Probably some combination of both. At any rate, the sauce is quite easy to put together, and even with thick chops, it makes for a quick & easy weeknight meal the next day. I’m already looking forward to adobo pork sandwiches tomorrow: I recommend making extra. 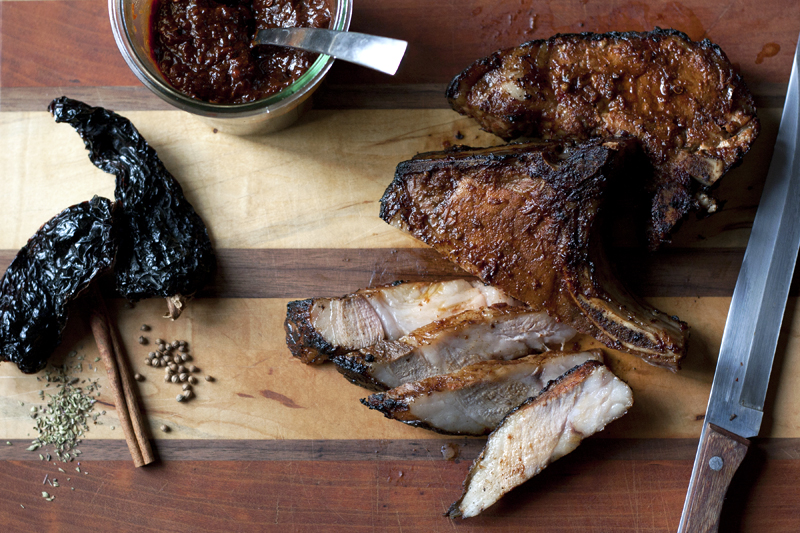