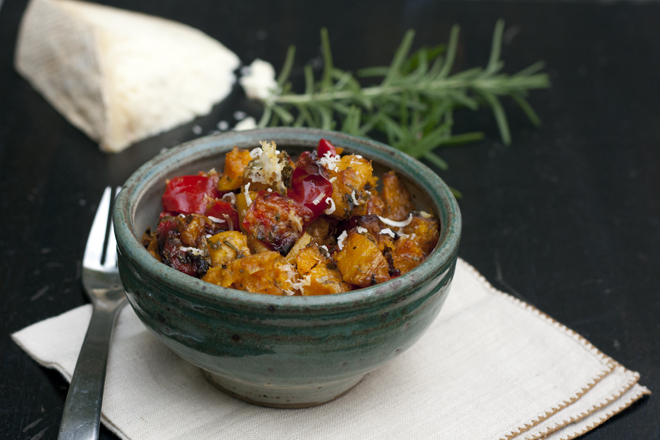 I’ve been making this dish for about a million years. Maybe a million and one. Even in the days when I didn’t really cook, living in Manhattan or in my teeny-tiny, 350-square-foot apartment in Boston’s North End, I would whip this up when Fall arrived, as a potluck dinner contribution or for a family Thanksgiving. I’m not quite sure why it’s never made it to these (hallowed) pages: maybe because I’ve been making it so long, it has ceased to feel like a “recipe.” But, it surely is a recipe, and a brilliant one at that (originally from Gourmet, natch.)

Over the course of the last million-and-one years, I’ve tried this every which way but loose: more or less squash, more or less bell pepper, with green, orange, or yellow peppers, with chiles, dried or fresh, with different herbs, with dried herbs, with butter or bacon grease, with meltier cheeses, without cheese, with a long, slow roast, with a high-heat short roast, with a broiler finish. The recipe below represents the pinnacle of roasted winter squash & bell pepper love: a dish that is truly greater than the sum of its parts.

Sounds so simple, doesn’t it? Some winter squash, bell pepper; a little garlic, a few herbs. Bind it all together with some olive oil & cheese and let the oven do its magic. And it is that simple: peeling the squash is the most difficult thing in this very straight-forward recipe. Well, that and waiting the hour or so for it to be done. But this is one of those deceptively simple recipes that rises above the ordinary to the extraordinary and I’m still not sure how or why. Any of the modifications that I’ve made in the past make the recipe distinctly less than wonderful. And while I’ve made some modifications to the relative proportions in the original recipe, all of the ingredients remain, and indeed, seem imperative to produce the magic elixir that is “our roasted butternut squash.”

This one is worth trying. If a million (+1!) years of practise won’t convince you, I don’t know what will.

Refirgerated for up to 1 week.