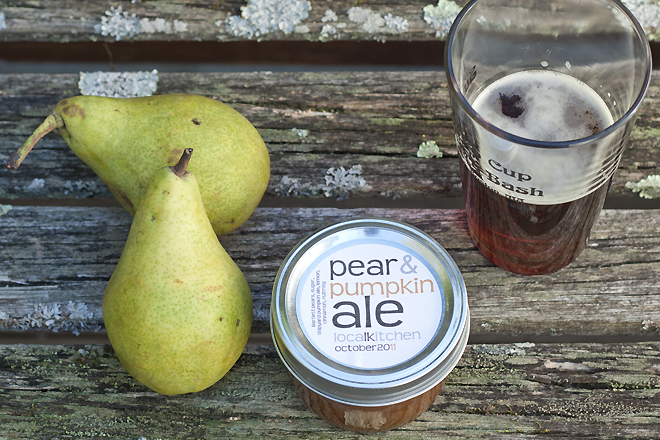 At long last, the infamous pear & pumpkin ale preserves experiment! Pear & pumpkin seem to go together naturally (and not just because of the awesome alliteration): their growing seasons overlap by at least a month; they are both sweet, yet with their own distinct notes, pears more floral and delicate, pumpkins an earthy, rich, root-vegetable sweetness; the classic autumnal spices, cinnamon, allspice, nutmeg & cloves, go nicely with both; even the colors work well together (if my wedding had any kind of ‘color scheme’, it was orange & green, my favorites).

Since pumpkin itself is notoriously difficult when it comes to canning, and these Bartlett pears from Madura Farms were so lusciously ripe and fragrant, I wanted to craft a preserve in which the pears could sing, but one that combined the best flavors of autumn. I had a Ferberesque preserve in mind, soft slices of pear swimming in a just-barely-set syrup. Yet, since I’m always cutting the sugar in a typical Ferber-style jam way, way down, I need to add some sort of liquid in order to provide enough syrup to coat the fruit. This liquid is usually either fruit juice or booze of some sort: I did think of a nice floral chardonnay, but when I opened the fridge for inspiration, a Shipyard Pumpkinhead Ale leapt into view.

Turns out I’m not the only one to think that the mildly sweet, lightly spiced and nicely pumpkiny Shipyard pumpkin brew would work well in a recipe: Shipyard’s Chef Gordon has whipped up a few recipes of his own (and honestly, how could I resist Pumpkinhead Whoopie Pies? Although that scant 1/4 cup of beer is barely qualifying, methinks.). I’m happy to say the Pumpkinhead worked very nicely in this preserve: both pumpkin and beer flavors come through, but mildly, so as not to overshadow the star attraction, the sweet, floral Bartlett pears. The set was about perfect, even without the addition of extra pectin (I apologize that there is no picture of an open jar, but Tai gobbled up the small bit of leftovers before I could photograph, and if you could see the number of open jars in my fridge right now, you’d understand why I am loathe to crack yet another), and the flavor really lovely, if just a tad too sweet for my taste (next time I will up the lemon juice a bit, or maybe add malt vinegar: see Options).

Paradoxically, pumpkin ales tend to disappear from the stores by Halloween, making way for the Christmas holiday beers, so if you want to try this preserve, you should stock up on your favorite pumpkin tipple now. If pumpkin ale is not your thing, I think the sweetness of the pears could handle a hoppier beer, but I would keep it on the light side: an Octoberfest, a wheat beer, maybe an IPA. I think anything darker than that would overwhelm the flavor of the pears. All in all, I call this experiment a success, and one that I’m sure to repeat next year. 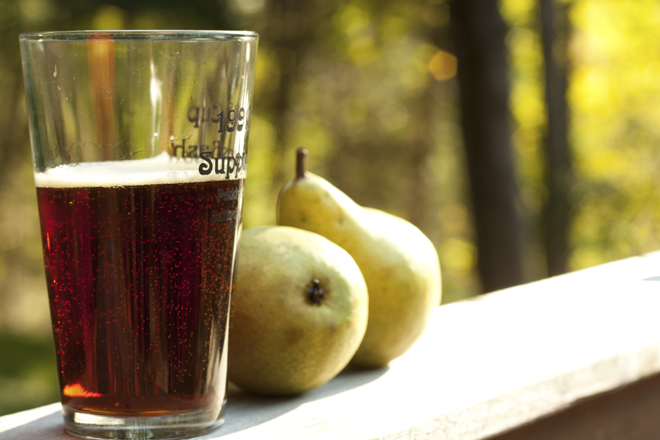 Canned, store in a cool, dark spot for up to 1 year. Refrigerated, use within 1 month.