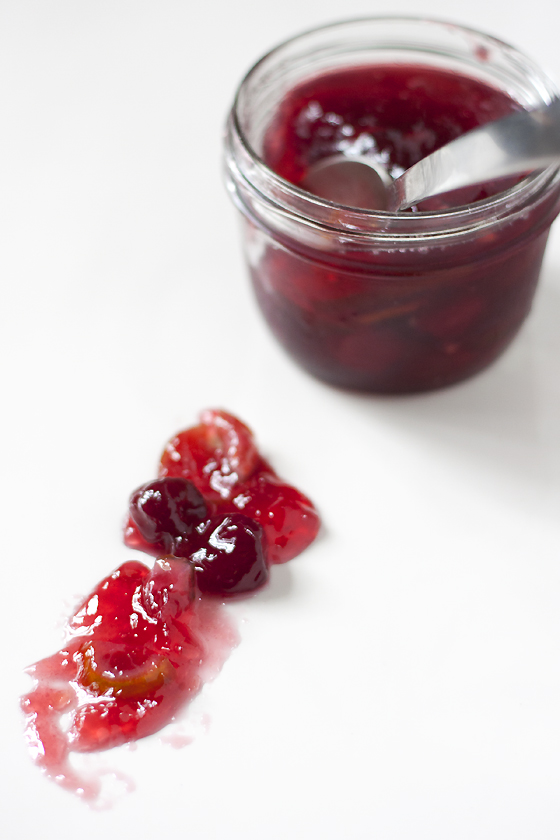 Does anyone still have cherries? No? Me neither. Maybe Newfoundland? Or wait: my homies in Saskatchewan, this one’s for you!

I’m late with cherries this year: as usual. Seems to be a recurring theme. (Another recurring theme? I think I’m going to miss blueberries this year. AGAIN. Sigh.) In happy news, Fishkill Farms finally had a productive cherry season: we’ve only been waiting four years. In unhappy news, they were charging $7/lb: for pick-your-own. And while I had lots of fun on my trip there with Autumn oh-so many weeks ago, it happened to be in the middle of that crazy New York heat wave. It was hot. I mean HOT. 94 degree and 8 bizillion percent humidity hot. So, while we valiantly picked a few quarts each (and a few quarts of raspberries, too), I sort of resented those $7 quarts of cherries, gathered sweatily in the harsh summer sun. I guess we could say I had a little passive-aggressive cherry angst going on this year: I let those cherries sit & sit. And I didn’t search out any more, despite my ardent and abiding love for the best cherry preserve ever.

Luckily for me, Julia was on the ball. She had to be down this way a couple of weeks ago, as she was selling jams at an artisan market at the Williams-Sonoma in White Plains. She hooked me up with a half-bushel of cherries from her ‘hood (already picked and way, way less expensive, mind you). I dried about half of them, then made a HUGE batch of the best cherry preserve ever. Then I pitted the last 5 lbs, dropped them in some sugar, and tucked them in the fridge. Then, somehow… it was August.

Where has this summer gone? Is it the fact that it started off so cold and wet? An early June 10-day trip to Our Nation’s Capital? The fact that I’ve had tons of data to analyze and reports to write? Maybe a combination of all of the above. Or maybe just proof that I really am getting old: the days. They just fly by. And here we are, just one day away from yet another trip this year, back out to my peeps in San Francisco, to celebrate my friend Melissa’s 50th(!) birthday in wine country, and to generally create a Ruckus By The Bay. SF: be warned. The Redhead Cometh.

But, before I fly off to Points West: cherry key lime marmalade. I know, I know: who makes marmalade in August? Who preserves cherries in August? Days-are-flying-by-way-too-fast girl, that’s who. And, I’ve gotta say, it was kinda fun, a-marmin’ in the summertime. (Think I’m going to start a white girl rap band. Our debut album? A-Marmin’ In The Summertime.) As for this marm: it’s really quite delightful. The recipe below makes an enormous batch: it easily could (and probably should) be cut in half, if, like most of the world, you’re running a bit low on cherries in August. <ahem> But, it’s tangy and tart and beautifully magenta with plenty of whole cherries and vibrant green citrus slices: this one will definitely wake up your taste buds. Yo.

Summer, or year-round with frozen cherries.

Not sure anyone has mentioned it but it's chilly out there... ❄🌬☃️ #tisMaine🌲tiswintah❄ #lifeatGrandmas