My girlfriend Christina grew up in Schoharie County, NY: home of Howe Caverns, tragic flood damage, and the Fabulous Beekman Boys. While she was home for the holidays, she picked me up the Beekman 1802 Heirloom Cookbook for Christmas. It’s chock full of seasonal recipes, using homegrown and local ingredients, handed down through the generations and adapted by the Beekman Boys, all on a farm only a couple of hours from here. Be still my local-girl heart.

Coincidentally, I had recently read the Bucolic Plague, Josh Kilmer-Purcell’s tale of how he and his partner Brent came to live in the Beekman mansion, so I knew a bit of their story. And as Christina and I sat down on the couch to catch up over champagne (and then wine, and yet more wine… but that’s a tale for another day), I paged through the cookbook looking for something I could toss together for dinner. I was not disappointed: it’s a lovely book, with lots of full-page photographs, sidebars to make a note of your own recipe adjustments, even a ‘keepsake’ section for tucking in your family’s favorite recipes. 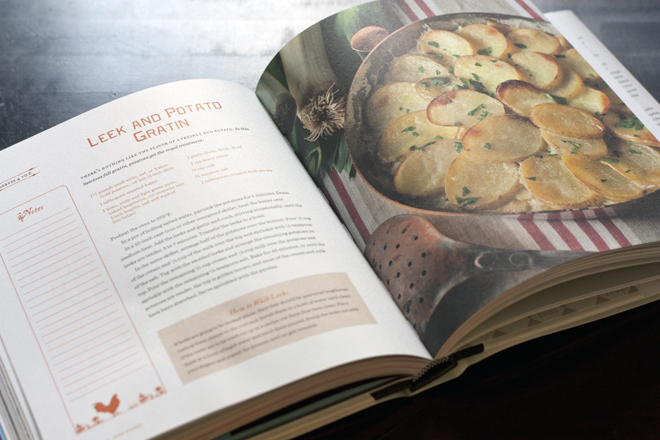 Several recipes caught my eye: corn chowder salad, orange gingerbread, pea pod risotto, and this: leek and potato gratin. Potatoes and leeks, milk and cream: we had it all in the house, so potato leek gratin it was! With help from Christina and Tai (both excellent commis), we made short work of the chopping, layered everything into the cast iron skillet, and settled in with more champers to await the glory.

And glory there was: the smell alone is enough to make the staunchest vegan consider a “just-this-once” exception. And the taste: it’s rich without being heavy, thoroughly potato-y without being bland, warm and comforting without being pedestrian; in short, quite wonderful. I made a few changes to the original, adding in cheese (it is a gratin, after all), lengthening the cooking time (I like a very crispy top), adjusting amounts of various ingredients, but I’m sure that success in this, like many deceptively simple recipes, is entirely dependent upon the quality of the ingredients you use. Newly dug potatoes, farm fresh cream, pastured-milk butter: they all make a difference. Use them and it’s hard to go wrong. (Especially if you have friends that buy you great cookbooks for Christmas. Thanks, Christina!)

Adapted from Leek and Potato Gratin in The Beekman 1802 Heirloom Cookbook by Brent Ridge, Josh Kilmer-Purcell and Sandy Gluck

Refrigerated, for up to 5 days.