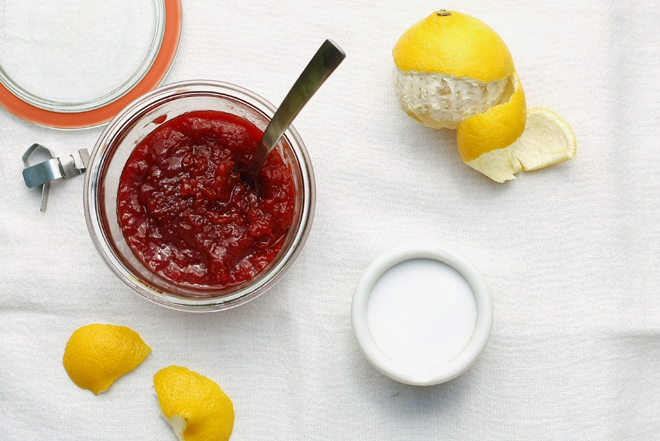 You would think I would learn. (You would be wrong.) After my last run-in with shriveled fingertip sour cherries, I decided to make another attempt at cherry jam, this time just a straight-up sour cherry (a little bit of lemon, a little bit of sugar) and a minimal maceration, overnight, banking on the fact that it was the week-long maceration that caused the color-leach in my last sour cherry preserving attempt. Well, don’t take that piece of preserving wisdom to the bank, folks: the overnight maceration caused the same color-leach, the same shriveled fingertips. Seeing as I was still not thrilled with the idea of shriveled fingertip jam, I popped the whole batch into the food processor, gave it a whirl to even out the color, and scraped it into a preserving pan. And you know what? Ten minutes later I had nearly a pint of toothsome, tangy, buttery, jammy, sour cherry bam! in the fridge.

A lot of pectin must have been released by the whirl in the Cuisinart: this jam set up more quickly than any I’ve ever cooked. I’m quite serious when I say in under 10 minutes it was cooked, jarred and I was moving on to the next preserving project. It was also a very small batch in a very wide pan: but I do think that the processing lent something quite unique to this preserve. It’s not quite a jam: it’s got a thick, firm texture out of the fridge, like a hard-set jelly, but it’s not smooth like a jelly, with lumps & bumps like a jam, and once it warms to room temperature it is spreadable and smooth, with a hint of a fruit butter texture. Hence the name: butter + jam = bam!  Or maybe it just seemed like a bam to me because it cooked up so quickly: before I knew it, it was done (I actually probabaly overcooked it a bit, because I couldn’t believe it was set already). The flavor profile is very pure, as this did not need a lot of sugar to set up (bear in mind that my sour cherries were pretty underripe when I picked them, and underripe fruit contains more pectin) and I still cannot get over how quickly it came together. I do enjoy digging my teeth into a big, complex preserving project: but sometimes it’s 92 degrees in the kitchen; or you have friends coming for the weekend; or the weeds are overtaking the garden; or you simply want to get back to the couch and your popsicles. When life gets in the way, sour cherry bam! comes to the rescue: you really can have your bam and eat it too.

p.s. You would think, given the fact that I write a blog about eating locally and seasonally, that I would manage to get posts up while the fruit in question is still in season. (You would be wrong.) So for those of you in Newfoundland – here’s a seasonal recipe! For the rest of you, file this away ’til next year. I’m off to try to get my blueberry crumble recipe written before blueberry season passes us by….

*OK, so it doesn’t really take 10 minutes because you need to stem & pit the cherries. But, for only 2 lbs, that doesn’t take me more than 15 minutes or so and the rest is a breeze. And you can break it up into two sessions, with an overnight maceration in between, to maximize garden/couch/popsicle time.

Refrigerated for 1 month or more. This recipe can also be canned in a boiling water bath, in jars filled to 1/2-inch, and stored in a cool, dark spot for up to 1 year.