Twenty-four years ago or so, my parents moved back home to Boston after a brief stint in sunny Malibu. I had just come back home as well, after finishing up my senior year of college in not-so-sunny Syracuse, NY, and was living in my first official “adult” apartment, on not-nearly-so-trendy-at-the-time St. Botolph Street in Boston’s South End. While it was nice to be back home in New England, and to have the family all in the same state, not to mention the same city, the news was not all good: my father was dying of cancer, you see.

The original tumor had shown up four or five years previously, prompting the usual round of surgery, chemo, radiation, and equal parts hope and gut-churning fear. But now it was back, and everywhere: lungs and liver, gut and brain. And while we carefully avoided the T-word, we all knew, intellectually at least, that the prognosis wasn’t good, was in fact very, very bad. So, we did what any self-respecting Irish-Catholic New England Yankee family would do: we buried our feelings deep under a barrage of black humor and childhood reminiscence. Lounging about my parents Back Bay condo, telling stories and cracking jokes about our misspent youth in Gloucester, MA, the conversation inevitably turned to The Great Oatmeal Wars.

I hate oatmeal. Despise it with a passion that is difficult to understand by those who see nothing but a delightful bowl of warm, toasty cereal on a chilly winter morning. I loathe oatmeal with every fiber of my being – the smell, the taste, the texture – always have and always will. My mother however, packing three kids off to school each morning in the frigid New England winter, felt very strongly that we should eat a hot breakfast before we left. That meant oatmeal. Turgid, lumpy, mushy, disgusting oatmeal. I’m sure, looking back, that it wasn’t every single morning of my winter school days in the 70’s; but that’s what it felt like at the time. This uniquely terrifying-yet-mundane torture, perpetrated each morning on me by one who purported to love me, all in the name of “a good breakfast.”

I’ve been called, once or twice, a bit stubborn. I have to admit: the accusation is not unfounded. Morning after morning I would sit, my lumpen nemesis in front of me, and methodically run through a series of avoidance tactics. Poking at the gelatinous mass with my spoon, digging small holes to make it look like I’d taken a bite. Scraping it up against the sides of my bowl; “Look! I ate the whole middle! Can I go now?” Praying for my mother’s back to turn so I could slip some to the dog (he was nobody’s fool; he hated oatmeal, too.). Finally, the oatmeal stone cold in my bowl, my mother would brandish The Ultimate Threat: she would keep me home from school if I didn’t take three bites.

Resolved to my torment, wanting nothing more now than to get it over with, I would scoop up a massive spoonful of the pungent goo and cram it in my mouth. I would rub the tops of my thighs furiously, trying to distract myself from the horror of stone cold oatmeal sitting like a dead jellyfish on my tongue, trying to force myself to swallow and be done with it. It only worked about half the time. The other half? I would gag, choke, rush to the bathroom and regurgitate the offending mush into its one proper receptacle: the toilet.

Fast forward 15 years, to that cozy Back Bay living room, the father dying, the family reminiscing. My mother teasing me about the Oatmeal Wars, saying, “You’d think I was trying to poison you! It was just breakfast!” And me replying, “I never understood why you kept giving me oatmeal, though; I would have been perfectly happy with cereal, or scrambled eggs, or anything else. It couldn’t have been easy to have that battle every morning.” And just as my mother was about to reply, to defend herself, my dad piped up, with his raspy voice, a result of the partial laryngectomy from the first bout of cancer, and his wispy, baby-bald head and innocent expression, “Yeah, Carole. I never knew why you did that.” And my mom, whose eyes got huge and filled with tears, whose hands came up in the air like this, this was the final straw, wailed: “I WAS TRYING TO BE A GOOD MOTHER!” 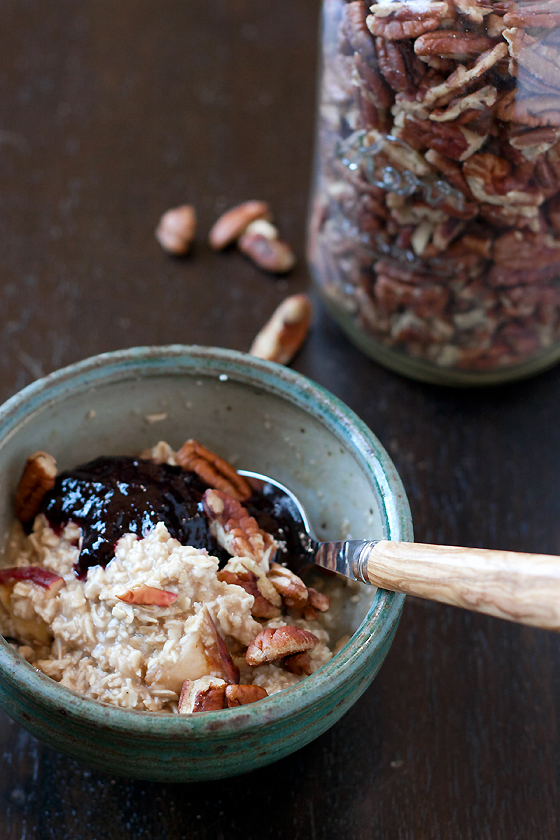 In an airtight container, at room temperature, indefinitely.

If you want to support a black artist and spoil yourself with an amazing handmade knife, you should check out @middletonmadeknives. I have one and it quickly became my go-to. #amplifymelanatedvoices