It’s been all-marmalade all-the-time in my kitchen for the last week. Between my standing winter splurge of red grapefruit from Texas and 7 lbs of California sunshine from the Lemon Ladies Orchard, I’ve had no trouble keeping up my Vitamin C levels and had citrus to spare to make marmalade for the rest of the year.

While I put aside a few pounds to make a favorite or two, I always like to try out something new. Last year I don’t think I had Meyers and Rio Red’s at the same time; this year, I decided it was high time to combine my two favorite citruses. (Citrii?) Since Meyer skins are quite soft, they don’t hold up well to my usual 3-day marm process. I could have started the grapefruit a day earlier, then added in the lemon on the second day, but I opted for something a little different. I peeled the grapefruit, discarded the white pith, and sliced the fruit, similar to the process in my honeyed grapefruit jamalade. This way both fruits could be cooked together and the bitter grapefruit pith did not have a chance to overwhelm the rather delicate, floral flavor of the Meyers. The only danger therein is: the grapefruit smelled so. very. good. when I was peeling and chopping… that I ate it. So this recipe contains the fruit of only one grapefruit, but the zest of two. What can I say? When it comes to Texas Rio grapefruit, I’m weak.

I had made a batch of grapefruit guajillo marmalade a few days prior to making this one, and it didn’t want to set, even though I cooked it to 224 degrees F. In fact, it’s still a bit liquidy in the jars sitting on my counter, waiting to be labeled. So I added a bit of citrus pectin to this batch, hoping it would help the set. Well, set it did: a bit too firmly, honestly. Sigh. I really need that Gel-O-Meter. I only had a tiny taste before this went into jars; it was bright and tart, but without overly assertive grapefruit bitterness. I think it will age quite nicely on the shelf: when I pop a jar, I’ll report back. 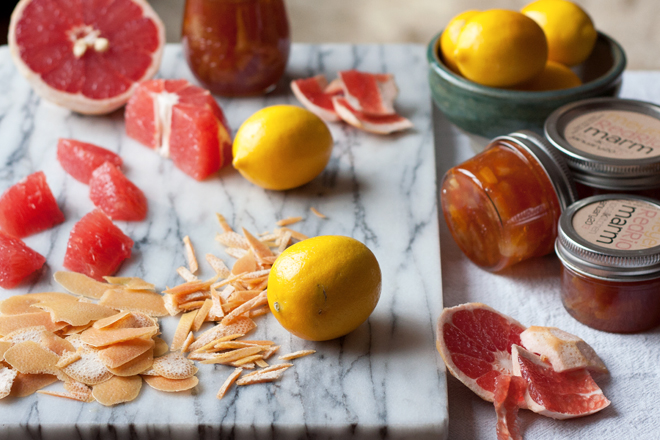 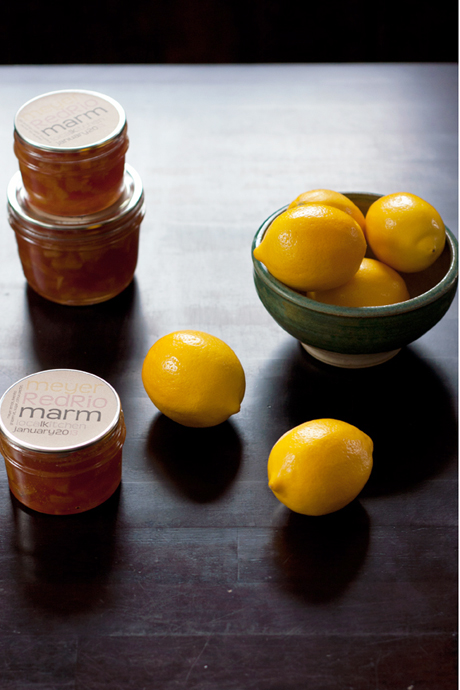