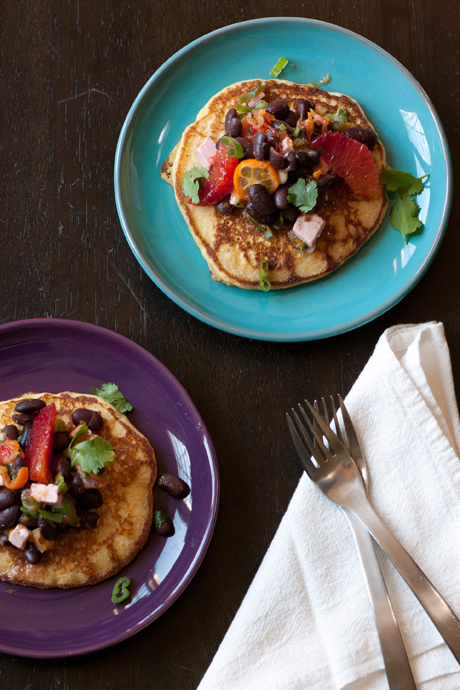 Have you ever made blini? I must admit, other than knowing that they were vaguely pancake-like, mostly Russian, and usually served with caviar, I didn’t know much about them until yesterday. They are essentially a pancake, but one that relies on yeast for leavening, rather than baking powder or soda. Traditionally made with buckwheat flour, I nevertheless found a few recipes online for a cornmeal version which appealed (especially since I did not have any buckwheat flour in the house). And why, you ask (all innocence & light) am I suddenly thinking about blini? Heh. You should know better.

I had blood oranges on the counter. I had cooked black beans in the fridge. I kept thinking about some sort of citrusy, bright, black bean salad; maybe with some grains, like couscous or rice, maybe with cheese, definitely with lots of fresh herbs. (I can feel my February jones for crisp greens and crunchy vegetables coming on.) But the more I kept toying with the idea of blood orange and black bean in my head, rolling that delightful alliteration around on my tongue, the more I wanted to amp up the volume: surely there must be another “bl” food group to toss into the mix?

Enter blini. Or blinis, as we tend to say in English, but since blini is already plural, I just can’t do it. Grammar, people: it’s what’s for dinner. I’d never made blini before, and since we know that I’m not exactly the pancake master, I was a bit skeptical. But I have to say: these were fabulous. Light, fluffy, with a hearty cornmeal flavor, yet not at all heavy. (Tai has eaten at least 10 this afternoon alone.) However skeptical I was about my mad pancake skillz, however, I was even more skeptical about how a recipe that was pullled together sheerly for the joy of alliteration would fare in the only measure that really matters: taste. Yet, once again, I was pleasantly surprised: these things rock the casbah. Or the Red Square, as the case may be. Tangy citrus, smooth feta, meaty black beans, crisp and fluffy cornmeal cakes: it all works. I’m off to dream up more alliterative recipe classics: I sense a cookbook in the offing.