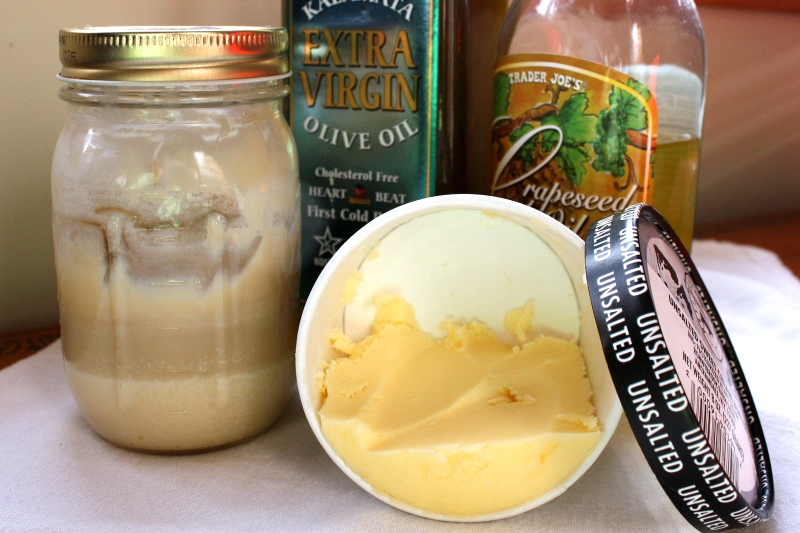 From the OED online:

Pronunciation:/fat, / noun 1) a natural oily or greasy substance occurring in animal bodies, especially when deposited as a layer under the skin or around certain organs, 2) a fatty substance made from animal or plant products, used in cooking 3)  any of a group of natural esters of glycerol and various fatty acids, which are solid at room temperature and are the main constituents of animal and vegetable fat.

So, you know that I am taking on the USDA’s Dietary Guidelines for Americans, separating the wheat from the chaff, the good information from the techno-babble, and trying to distill all it into a form that non-government, non-scientist humans can understand. One of the key recommendations throughout that document regards fat: they want us to eat less of it. They site clinical studies that implicate dietary fat in a host of disease states: heart disease, atherosclerosis, diabetes, cancer. But  are they looking at all the appropriate studies, or picking & choosing based upon selective criteria? Are they biased by the weight of scientific evidence from years past, or are they viewing recent studies with open eyes? And are the studies themselves asking the right questions? 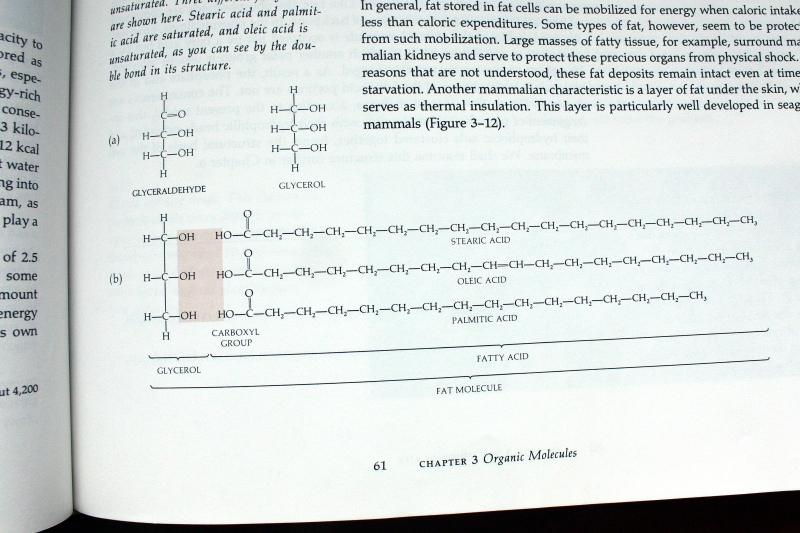 It’s a complex topic, and I’ll tell you right now that there are many conflicting opinions and few clear-cut answers. But I realized that before we can delve into the heart of the matter, we need to understand exactly what fat is: what all the terms mean, how they interrelate and how the scientific terms describe what ends up on our plate. Now, to learn exactly what fat is, we’re going to need to resort to – hang onto your hats – chemistry. Because chemistry is life, people (up until the point where physics is life) and at some point, we need to grasp a little bit of chemistry if we’re going to understand life. Think of it this way: chemistry is form, while biology is function. Since form follows function, understanding the chemistry can make the biology obvious, or at the very least, more intuitive. And I promise it won’t hurt. I’ll give you a lollipop after. Are you with me? OK, let’s go!

According to my college Biology textbook [4th ed, 1986(!)], lipids are a general category of compounds that do not dissolve in water, but readily dissolve in solvents such as acetone (think nail polish remover – by far the easiest way to get peanut butter out of a child’s hair). Fats fall into the lipid category (along with cholesterol and other steroids, phospholipids, soaps & detergents, and some vitamins). Hence all fats are lipids, but not all lipids are fats. With me so far?

Picture this: you take a blueberry; you stick three toothpicks in it. This is your basic representation of a fat molecule. The toothpicks are your fatty acids: long, straight chains of carbon atoms, linked hand-in-hand like a pre-school class on a field trip. The blueberry is your glycerol, the compound that packages the fatty acids into groups of three. Dietary fat molecules are composed of three fatty acids all bound to a glycerol, hence the name triglyceride (fat molecules can also be mono- or diglycerides, but all dietary fats are triglycerides).

From Ben Mills, via Wikipedia.

Fatty acids are the long chains of linked carbon atoms (the toothpicks, or chain of kids holding hands, represented by the grey strands at left). The white balls are hydrogen atoms, bound to carbon (picture every child in the pre-school chain wearing a white hat and white shoes). The glycerol (blueberry) is in red.  So, to review: a fat molecule consists of three fatty acids, each a chain of carbon atoms bound to hydrogen atoms, all held together at one end by a glycerol. (For the chemistry-inclined, this page shows the C-H bond structures of various fatty acids.)

So, now you have a triglyceride. But, since all fats have a glycerol in common, the fatty acids are where the action is: differences in fatty acid structure relate to differences in performance, and impact on human health (form follows function again). Remember those white balls? They represent the hydrogen atoms, bound to the carbon chain that is the backbone of the fatty acid. A fatty acid in which every ‘free’ carbon binding site (all the kids’ heads and feet; the hands are already ‘bound’ to each other in the line) is bound to a hydrogen is called saturated (every kid is wearing a white hat and white shoes); the carbon chain is saturated with hydrogen atoms. Likewise, a carbon chain that does not contain a hydrogen at every potential carbon bonding site is called unsaturated (some of the kids, with wild abandon, took off their hats and left them in their lockers).

Those ‘free’ carbon sites, unbound to a hydrogen, will form a bond with a neighboring carbon (the notation being a double bond, since the carbons are already bound once in the backbone; i.e. the kids are already holding hands; when the teacher knocks their heads together for not wearing their hats (hey, it could happen) they are “bound” twice – at the hand and at the head). This double bond produces a kink in the backbone (picture the kids trying to walk in a straight line if their heads are stuck together), hence unsaturated fats have a bent or kinked shape while saturated fats lay flat. A monounsaturated fat contains one carbon double bond (one kink); a polyunsaturated fat contains two or more double bonds (seriously kinky).

Well, kids, I think that’s enough for today. Join us in the next class when we talk about trans fats, hydrogenation and the demon cholesterol, which isn’t actually a fat at all, but a steroid (no, not the Barry Bonds kind). As homework, please give a holla below if you have any feedback on today’s class: Was it helpful? Boring? Too complicated? Too simplistic? Too long? Too short? Are you all jazzed up to learn more about fat, or are you just waiting for me to make more jam? I’d be happy to hear your thoughts.

Sources: Wikipedia does a nice job on fat, with lots of citations and good sub-pages on the various forms. A veritable geek-fest on this lipids page from Michigan State. This page from UC Clermont has some nice diagrams and clear descriptions of various types of lipids. Molecular structure diagrams were prepared by Ben Mills, used via Wikipedia Commons. Fatty acid profile plot from the Dietary Guidelines 2010.

Disclaimer: Organic chemistry is not my forté and it’s been quite some time since I’ve thought about these concepts. I’ve culled this information from various textbooks and (hopefully) reputable online sources; however, if you are a chemist, teacher, student or enthusiast and you notice something above that is misleading, or flat-out wrong, I do hope you shout out it below.