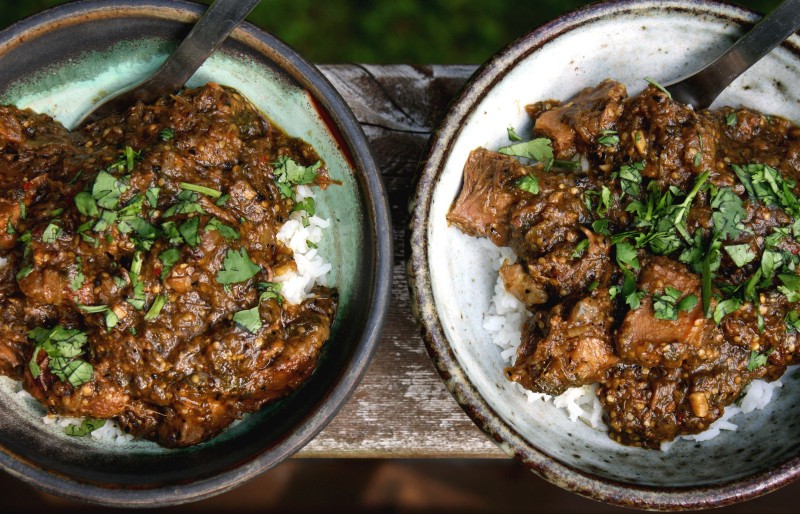 Summer is in full swing here in New York and while it doesn’t seem like you would want a pot bubbling on the stovetop for hours, Chile Verde always strikes me as a quintessential summer dish: bought at a roadside stand in some dusty, hot, Mexican town on the way from one surf spot to another, ladeled into piping hot, homemade tortillas and liberally sprinkled with fresh cilantro. Heaven.

This version is nearly as good (although the lack of surfing-inspired appetite may cause it to suffer in comparison); relatively simple to prepare, it is made even easier by the frozen Chile Verde Base that I put up last summer (but you can make it from scratch with fresh or canned tomatillos).  Like all stews, it stores really well and becomes even more flavorful after a day or two in the fridge.  Great to re-heat for a quick lunch or dinner, the big batch I made on Tuesday is already gone. And that, my friends, is the worst thing about this recipe: before you know it, it will be gone.

For other versions of a chile verde dish, see Venison Chile Verde and Chile Verde Carnitas.

Adapted from Chile Verde, by Elise and Arturu Vargas, at Simply Recipes

Like all stews, this will thicken and improve on the second day and will last for up to 5 days in the refrigerator.

Tomatillos are in season in late summer. With frozen chile verde base and frozen pork, this dish can be made year round.