Yes, you read that correctly: marinated green bell peppers. Because you know what comes before red bell peppers? Green bell peppers. All peppers start out green: it takes time (and sunshine, love, devotion and a near-pathological desire to fend off every bug in creation) for the peppers to turn red. A lot of time. Like we are lucky if we see local red bell peppers before September. The one (1!) I managed to grow two years ago was still out on the deck, struggling to turn red, in mid-October. Add to that the fact that red peppers are, well, red. Meaning that as soon as that first, long-awaited red blush appears on your lovingly tended pepper plant, every bug within a 20-mile radius perks up his (or her; sexism sucks, even in the insect kingdom) antennae and makes a beeline (ha!) for your precious pepper. This is part of the reason that red bell peppers are one of the dirty dozen (it takes a lot of chemical warfare to dissuade every bug in the ‘hood) and why organic red bells are so expensive (a local farmer told me that you need to plant about 6 times as many as you want to yield).

All of that is a round-about way of saying: I would love to make the traditional marinated red bell pepper recipe. But what I have now, in August, is a boatload of green bell peppers. My CSA farmer, Betsey Ryder of Ryder Farm in Brewster, NY, grows a lot of peppers: green bells, Cubanelles, a deep purple bell (which, sadly, turns a ‘normal’ green color when cooked). So we get lots of them in our CSA, and since last year was a very sunny, productive year on the farm, I still  have chopped green bells in the chest freezer. I definitely needed a new way to preserve them, preferably something that would not take up freezer space. Enter marinated peppers!

I very slightly adapted Shae’s recipe, from last year’s October Can Jam (are you remembering to check the Can Jam archives for inspiration this year? I’ve been back time and time again.) adding just a touch of honey as green bells are not as sweeet as red bells, and cutting the recipe in half as I’m not really sure how these will turn out. Of course, the same basic recipe will work for any color of bell pepper, or a combination. For added inspiration, check out Julia’s marinated pepper recipe, also from the October Can Jam; the reason I chose Shae’s recipe was that it had a bit more acid and a bit less olive oil (and I must admit, that much oil in water bath canning freaks me out a bit). But I trust both sources: Julia’s recipe is from the Queen of Canning herself, Linda Ziedrich, and Shae’s is from Eugenia Bone, and confirmed safe by the USDA’s Cooperative Extension folks at UC Davis, so I’m sure that the recipes are safe. But, with green peppers at least: will it taste good? I have no idea. My jars need to sit on the shelf, marinating and maturing, for a few weeks to find out. I’ll report back when I’ve cracked a jar and tried them out.

Adapted (barely) from Pimientos Rojos by Shae at Hitchhiking to Heaven 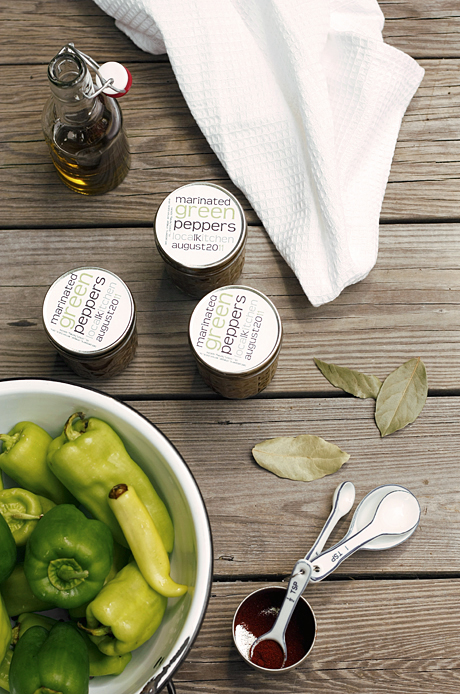 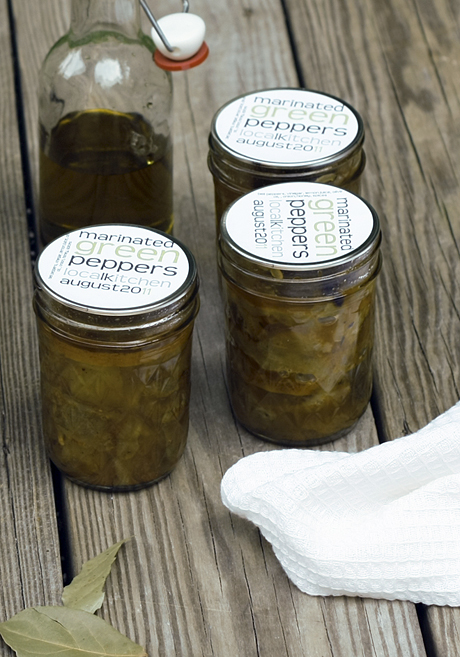