As part of my ongoing effort to create a beautiful yet functional kitchen, I present to you today’s episode: The Tower Shelf. Now, tower shelves are hardly revolutionary, and they are particularly well known for working in small spaces: with a small footprint and a tall narrow shape, they are often the perfect solution for a lonely corner, tiny hallway or, in our case, floating in a room with all-too-little wall space. In our little cottage, with a 900-sf footprint but lofty 12-foot ceilings, tall & narrow makes perfect sense. But when we first moved in, I could find no good spot for this particular shelf; due to double French doors, a large picture window and an original barn roof that slopes down to only 3 feet off the floor, wall space is at a high premium. Since we are a family of book lovers, bookshelves encompass almost all of the available wall space: this tower shelf ended up lying on its side up in our loft, doing duty as a dresser of sorts, holding a seasonal collection of shirts & sweaters.

And there it stayed, until a month or two ago when I was searching for a way to make the Dread Food Cabinet less, well, dreadful. The magnetic spice tins were a great start, but there was still plenty of room for improvement. Since it was right before Christmas, I was very reluctant to spend any money on an organizing solution. I eventually thought about how, when you move into a new place, you discover all sorts of ways to re-purpose furniture and decorative items that you already have, simply because you have new spaces to work with. And I started thinking about how I might rearrange, or what I would do differently, if I were moving into our place today. 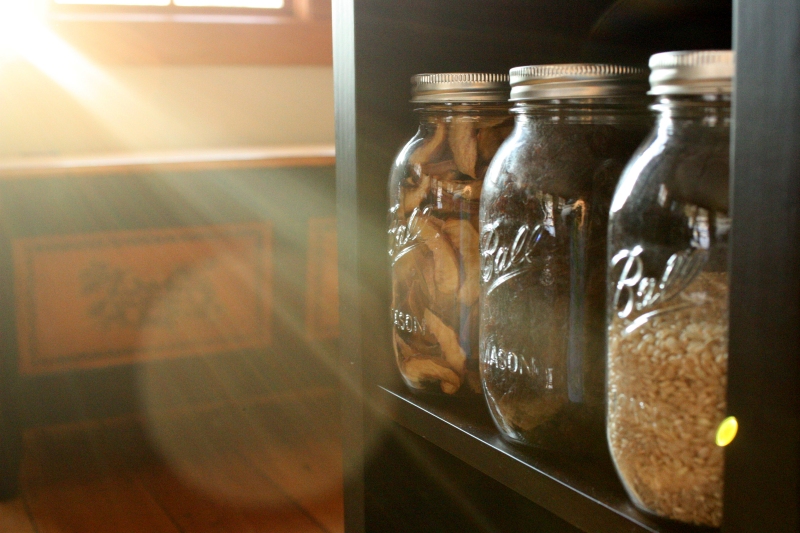 Without my realizing it, one of the pieces that had been bugging me for a while was an old (as in 1990 old), rather battered tower shelf that held my albums (yes, as in vinyl; I’m so retro I’m hip again). It was sort of a crappy set of shelves when I bought it, as a poor, just-out-of-college kid, scraping by in Boston on a temp secretary’s salary. But, because I never throw anything out, I still had it: I’d given it a facelift a few times over the years, painting the shelves various colors (silver being the latest incarnation) and mostly it was sort of invisible: the albums drew the eye, not the shelf itself. I realized in a flash that: 1) I was sick of looking at it; 2) if I got it out of the way, I could put something else there that could be functional for kitchen storage; 3) if I moved it to the garage, I could use it for extra jar storage(!). Of course, it wasn’t quite that simple. We toyed with several different options: move the albums to the bedroom (already a tight squeeze, and didn’t make sense as it is not near the turntable), split the album tower into two shorter shelves (they are stackable, modular sections) and use them as two endtables (a cool idea, but we only had space for one endtable and  it didn’t solve the “sick of looking at it” problem); move the albums to the loft (again, access and convenience to the turntable an issue, besides, I like to have them out where I can see them).

Eventually I hit upon a convoluted and quintessentially Kaelaesque plan: 1) move clothes from loft tower shelf to some extra grass storage baskets; 2) move tower shelf out of loft to current album spot (which involved taking said tower shelf apart, in the confines of the 32-inch-ceiling loft, getting it down the ship’s ladder that gives access to the loft, then re-assembling; my husband is a very patient man); 3) consolidate books in hallway bookshelf, move some to “auxillary library” up in loft, utilizing newly liberated tower-shelf space; 4) move albums to hallway bookshelf; 5) move old album tower shelf down to garage, stack with jarred preserves; 6) fill tower shelf with pretty jars of pantry staples, freeing up space in the Dread Food Cabinet, making access to pantry staples oh-so-much easier, and adding beauty and functionality to the kitchen. (Did you follow all that? There’ll be a pop quiz later.)

And the moral of the story? I’m crazy. Well, no, not really (yes, I’m crazy, but that’s not the point): the moral here is that with a little inventive thinking, you may well find that the solution to your organizing woes is at hand. I didn’t spend a dime on this space solution: simply re-purposed things I already had (granted I had a few <ahem> extra jars in the garage. See previous point re: crazy.). Yet somehow I ended up removing an eyesore storage shelf, gaining extra storage in the garage, reducing clutter in the one food cabinet, making a massive improvement in kitchen functionality (making granola is a joy now) and adding an element of beauty to the house that makes me smile every day. So the next time you are tearing your hair out over the pantry shelves, or the cabinet under the bathroom sink, or the linen closet… look around you. The answer may be right under your nose. 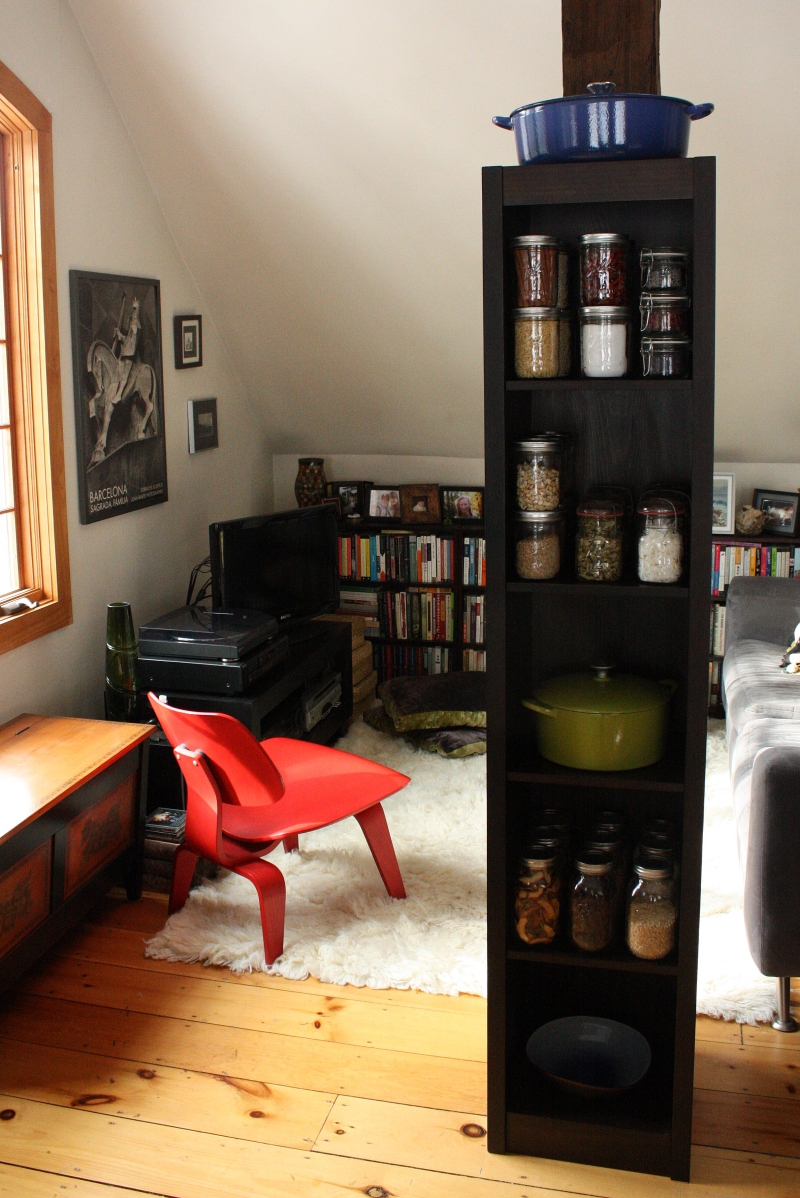