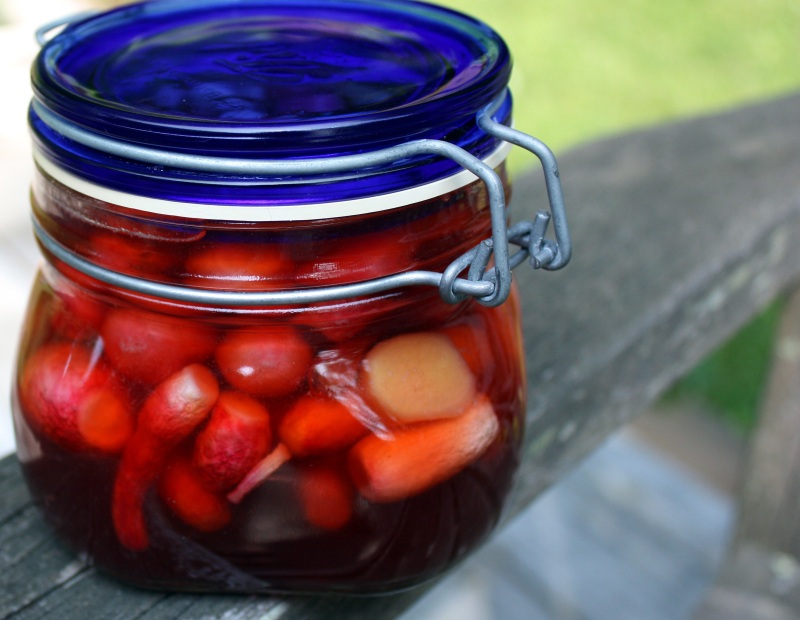 I put these little beauties up right before I left for South Africa, since I knew that two big bunches of radishes would do nothing but wither and die in the crisper if they had to rely on my Darling Hubs to eat them. They have been pickling away, down in the relative coolness of the garage, for over a month now, so I figured it was about time for a taste test.

First and foremost: I won’t pickle the long, skinny French radishes again.  They look like nothing so much a shriveled human fingers, floating in a jar of formaldehyde. Not so appetizing.

Secondly, Tai said: “They sort of taste like fingers, too.”

“Excuse me?”, I replied. “And how exactly do you know what fingers taste like?”

“I mean they are sort of squishy on the outside, like fingers, but crunchy in the middle, like bones.”  Ah, of course. Silly of me.

“But how is the flavor?” she persists. “Can you taste the ginger? The Thai pepper?”

“Oh, yeah, they are really gingery.  Good soy flavor too. You don’t taste the hot pepper very much.”

“Ah well,” she sighed. “At least the brine turned out well.”

“I think they’d be good sliced into a salad!” Tai’s answer to everything: put it in a salad.

Verdict? Flavor: A. Texture: C-. Appearance: F. Anyone out there have a kick-ass radish pickle recipe to share?

If you achieve a good seal, store at room temperature, protected from light, for up to 1 year.  If not, refrigerate; they should last for months.

These tiny little radishes show up at farmer’s markets in the Spring and sometimes again in the Fall.