I have a fabulous braised chicken recipe to tell you about, but really? Who’s going to be braising this weekend?  Memorial Day weekend is all about the grill, baby: easy-peasy, flip-flop wearing, cold beer in hand, 2-minutes-a-side-and-dinner-is-done kind of cooking.  So, in honor of the holiday weekend, the 88(!) degree weather predicted on Sunday, and the annual kick-off to Summer (and all the fabulous grilling that comes with the season), I present to you Local Kitchen Grillfest 2010.

A couple of things you’ll probably notice as you peruse the recipes: one is that there is a lot of meat. It’s not that we don’t grill vegetables, we do pretty much every time we grill anything; it’s just that I never think that throwing asparagus, or bell peppers and onions, or summer squash, in a grill basket over the coals, maybe doused with a little olive oil & balsamic, really qualifies as a ‘recipe.’  Rest assured, there is a lot you can do with veggies on the grill, but hey – my blog’s only got one year of grillin’ under its belt. Give it time.  Secondly, there is a lot of white meat. I’ve never been a vegetarian, but there have been years when I’m pretty close; other than the occasional bacon-with-brunch and maybe a once-a-month chicken sandwich, I was pretty non-meatarian. Now that I’ve been able to source humanely-raised, pasture-fed, delicious meat, I eat it a bit more often, but still; I haven’t eaten beef in about 25 years and I’ve never been a fan of game meats, and since I’m not the biggest fan of dark meat, lamb, veal, duck and lots of others sort of fall off the menu. Growing up in Gloucester, MA as I did, the irony of ironies is that I cannot stand seafood; any seafood (yes, even shrimp), in fact anything that comes from the ocean (vegetarian sushi still has seaweed, people – ewwww). So, no fish on our grill either.  (For those of you are now feeling badly for Tai, doomed to a life of nothing-but-white-meat; don’t.  He is perfectly free to bring home burgers, steaks, salmon or lobster; anything he wants, and I would even attempt to cook it for him.  He just doesn’t; he says it would be ‘mean’ to make me cook something that I won’t eat.  I’m not sure how he reconciles the pickles and mustard, however.…)

If you practice a slightly less <ahem> restrictive carnivory, by all means substitute your favorite animal flesh into the recipes below. Many of them are more technique oriented, or all-about-the-marinade, so substitutions should be easy.  Remember, though, when I give an internal “done” temperature, it is meat-specific: use Our Friend Mr. Google to determine the safely-cooked temperature for your Grillfest meat of choice.

Pork Tenderloin on the Grill

Bone-in Chicken Breasts on the Grill 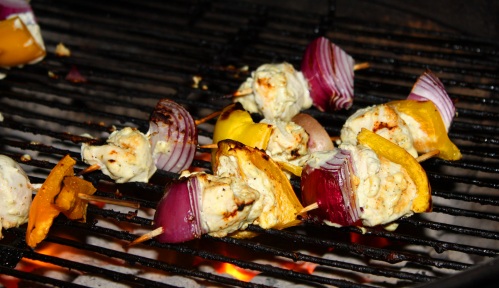 Cider-Brined Pork Chops on the Grill 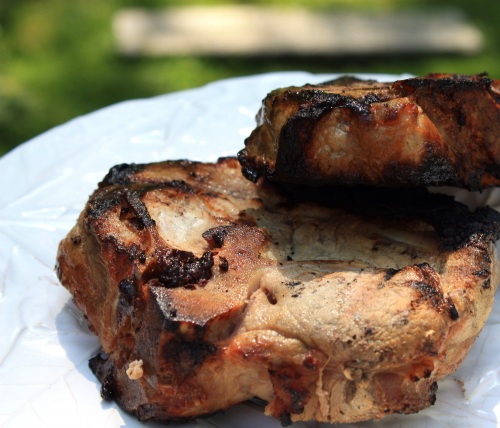 Tai’s Grilled Corn on the Cob