According to my last Garden Update, it’s been about a month since I direct-sowed a whole lotta seeds in pots out on the deck.  I have what seems like a million pots on the deck, and then a bunch more down against the rock wall in the driveway, what my friend Nadine calls “Little Tuscany.”

We’ve had cool and rainy weather for the last month.  Some gorgeous sun this weekend and my plants definitely responded, but I think they are little behind where they would be if we’d had more sun. Let’s see how they’re doing, shall we?

The spearmint (left) and lemon balm (right) are growing like gangbusters.

The German butterball potatoes (left) are coming along, but I may have planted too many for this pot.  The purple Peruvian potatoes (right) have spent more time down in the driveway, soaking up the sun, so they are nearly ready for earthing up.

Pole beans, from transplant (left and lower) and direct-seed (upper right). The lower leaves are turning yellow and then dropping off; not sure what is causing that, but the vines are growing rapidly (about to the top of a 4-foot stake) and the new leaves are all green.  I think I will apply more compost this week and see if that helps.

They say that herbs are the easiest plants to grow. I beg to differ. One of my herb pots (containing chives, cilantro, cumin and a couple of other plants that I can’t remember) is doing well, the others well.. not so much.  The lemon basil and lemon verbena look pretty sad, I’ve decimated the rosemary to the point where it will likely not recover and the mint never germinated (although a volunteer mushroom decided to move in).

The LI cheese squash (left) and cucumbers look healthy enough but they are growing really, really slowly. I just noticed today another cheese squash seed just about to break through the soil (you can just see it in the lower left of the picture); that means it’s taken over 4 weeks to germinate!  Granted, we’ve had some quite cold and rainy weather but… my cucumber plants grew much faster than this last year, when I germinated them indoors and transplanted. 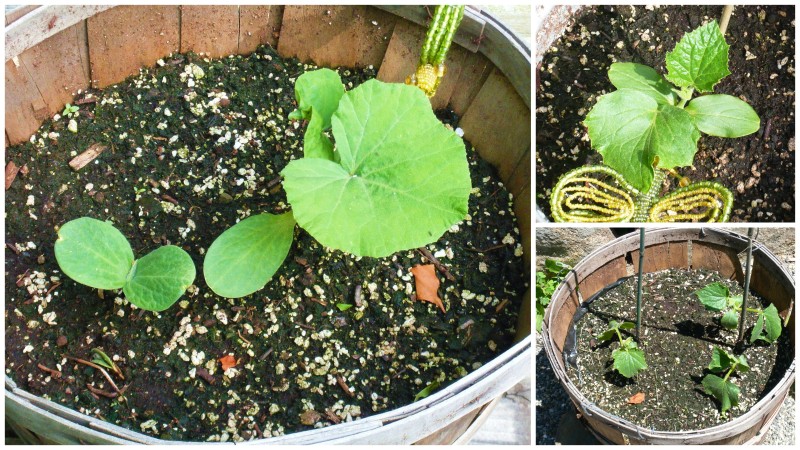 The Matt’s Wild Cherry plants are looking quite robust, one in a hanging planter on the deck and the other in “Tuscany.”

And for those of you who are wondering if Earth Boxes are as good as everyone says they are – a picture is worth a 1,000 words. Tomatoes (Stupice) in the Earth Boxes are in the back, the teeny, spindly little plants are tomatoes (Stupice, Silvery Fir and Thessaloniki)  in regular plastic pots in front.  They were transplanted at the same time (2-3 weeks ago) and were about the same size then.  I only wish they weren’t so expensive.

Lest I neglect the pepper plants, the cayenne and jalapeno peppers (left) are coming along fine. The window box on the right contains borage, cumin, chives, lemon balm, and those teeny, tiny little plants right at the bottom of the picture are red bell peppers.  Red bell peppers that were started indoors on April 13. At this rate, they are growing about 1/4-inch a month…